Pain Bliss and the Eternal Now 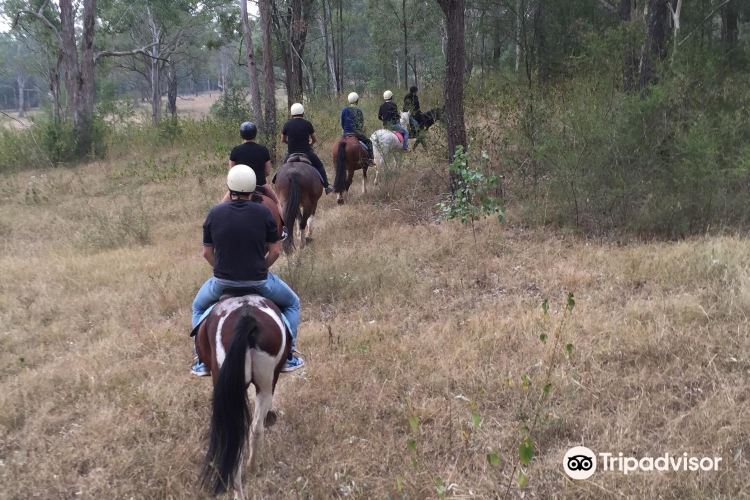 Well it's the day before Christmas and I am confined to my bedroom and find myself in quite a bit of pain. A few days ago I took my daughter Zoe (7 yrs. old) for a horse ride.

On the trail a huge tree fell right as we were riding by, it made a tremendous noise, like a gunshot, only louder (to my ears). The horses were spooked and suddenly all hell broke loose as the horses bolted. Little Zoe struggled to stay on as her horse (named spook ironically) galloped full pelt up a hill, Zoe suddenly came off and smashed into a tree.


I was probably in shock and on top my own bolting horse (named Jerry) we flew by Zoe who lay on the ground screaming in pain, I dismounted my horse while it bolted at full speed and hit the ground hard, tumbled down a hill and suddenly a tremendous pain in my right foot.

Running to Zoe the pain was almost unbearable, we huddled together on the ground, covered in scraps blood and dirt, it was a hot day. "This was the worst thing that has ever happened to me" said little Zoe, I just held her and asked the shocked people about us, who were also on the ride to call for help.

We spent the day at Emergency in Katoomba and Zoe was discharged a few hours later and I was told I had a badly broken foot and will likely need a get metal pins put in during an upcoming operation.


I am re-watching a video interview between Richard Moss and Ian McNay of Conscious TV today and am moved to share a link to that interview on this blog.


In the interview Ian attempts to corner Richard into speaking about the Transcendent Oneness of Awareness, spoken of as the ultimate state by so many of today's spiritual teachers, many of whom have certainly come into a direct union with their own true nature. Yet Richard was not about to go down the path of leading us away from our own humanity and the directness of the profound beauty of being human, by creating a yet another goal "to attain some state" apart from the what is so blessed of their everyday lives.

Richard stated something to the effect of "he would rather identify with what is vulnerable in him, than with the transcendent awareness, as it is our vulnerability, our humanness that allows for gentleness, love compassion humility and a profound oneness or union with nature". (paraphrased)


I won't attempt to relay his exact words, I am needing to go lay down again but I do implore you to watch this interview.

Popular posts from this blog

My Own Journey with Kundalini

August 02, 2020
My Own Journey with Kundalini  Many years ago, I found myself walking into a small upstairs room in a quiet suburb of Melbourne Australia to meet a man who, I had heard, had undergone a deep awakening into the unitive dimension of being. That man was Master Charles Through a series of seeming coincidences (I had been interested in brainwave entrainment sound technology and Kundalini awakening ) I had been led to this room, and with great anticipation I awaited his entry.  Up until this point in my spiritual journey I had been an ardent reader of teachers such as Jiddu Krishnamurti and Nisargadatta Maharaj, along with various Christian mystics such as St. Teresa of Avila and St. John of the Cross. More recently, I had been introduced to the late Nityananda of Ganeshpuri, and Baba Muktananda. Needless to say, I had high expectations.  When Master Charles entered the room, I observed him closely; he seemed to sway like a drunken elephant and moved very slowly. He was wearing what appeare
Post a Comment
Read more

November 22, 2012
It's been a long while since I last updated this blog and the thought to do so, has been popping into my mind for a while now, so here goes! I run a small publishing venture Tandava Press with my wife Natasha The first book to be published was my own The Dance of Stillness Well, recently we published "What Am I? A Study in Non-Volitional-Living" By American Author, Artist Galen Sharp. I can't begin to express my gratitude for to the Universe for the gift that it has been, to both my wife and I, in being privileged to help bring this book into being. Galen is a teacher, albeit, a reluctant one, of what is known as Advaita, or Non-Duality. The word Advaita quite literally meaning Not-Two! The central thrust of the message in Galen's book is "You Are Not What You Think You Are", that we have a completely false idea (generally speaking), of who or rather what we-are! In Galen's book the reader is taken on a tremendous, life transforming journey of
1 comment
Read more

David Rivers interviews Galen Sharp about his book "What Am I? A Study in Non-Volitional-Living"

August 02, 2020
"What Am I? A Study in Non-Volitional-Living" Explores a variety of subjects such as science, philosophy, quantum physics and even some of the ancient masters in quest of a higher way of knowing the world and ourselves. ABOUT THE AUTHOR Galen Sharp is a sculptor and author. In the 1970's he began a correspondence with the brilliant and enigmatic non-duality sage Terrence Stannus Gray, who wrote under the name Wei Wu Wei, that was to last several years. His teaching was to completely transform Galen's worldview and life. This book is the fruit of Wei Wu Wei's influence on a young seeker after truth.  Galen's book on Google https://www.amazon.com/What-Am-Study-Non-Volitional-Living/dp/0987380613 https://www.facebook.com/NonVolitionalLiving/
1 comment
Read more

David Rivers
A ripple in the ocean. In my early twenties, I was profoundly impacted by a sudden and unexpected spiritual awakening, and with it a powerful flow of subtle life energy known as Kundalini. Spirited and spiritual, yet free to think and be, with a dash of dark. I enjoy to play, learn and grow. I write, publish, draw and paint. I have one foot in the Divine and the other firmly here, with all of lifes sublime and messy pain. By grace I am opening to give more and more these days, although there is still a lot of soul schooling happening. I am happy in paradox, I like people who are kind of loose, un-formed, not so solid in ideas of right and wrong. They tend to be messier, yummier, deeper, darker and a hell of a lot more fun.